Team Britannia principal Alan Priddy was recently hailed by the Portsmouth News as inspirational. Onboard journalist Clive Tully thinks it was a good choice.

When Team Britannia principal Alan Priddy last week found himself one of 50 subjects in a Portsmouth News special supplement devoted to inspirational local people, he was well and truly surprised. If the press does a story about you, you usually know in advance either because you instigated it, or a journalist will have been in touch asking for a quote, but in this instance there was nothing. So what made him one of their choices? 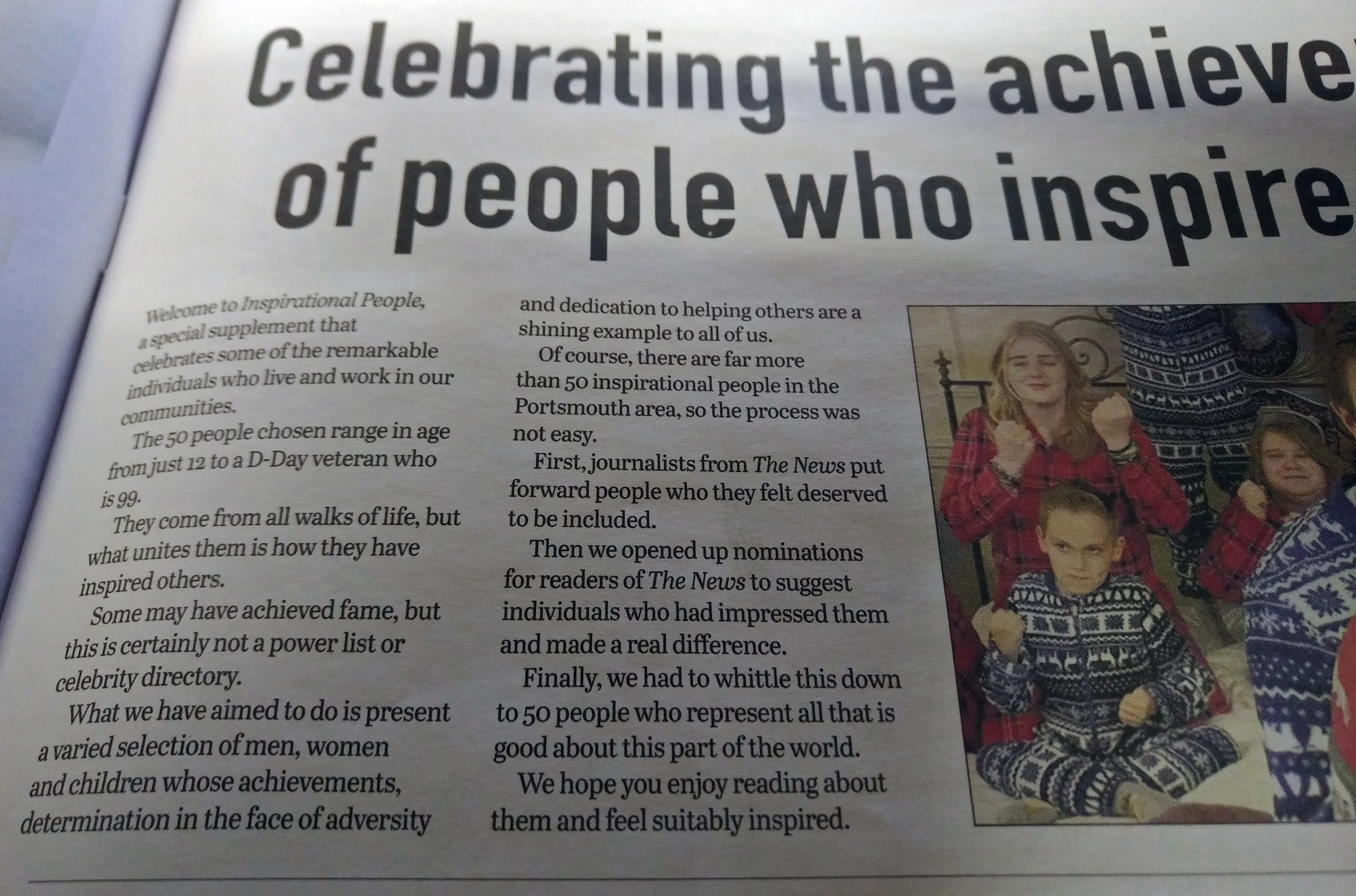 For as long as I've known Alan, he's always been doing things to help others. While some might simply dip their hands in their pockets to support a charitable enterprise, Alan has always taken a more hands-on approach, more willing to give of his time. That was certainly the case when he decided to build a school in India, but when it comes to helping and inspiring others, Alan's crowning achievement must surely be his 2006-8 round the world sailing project with Sir Alec Rose's yacht Lively Lady, and the difference he made to the lives of the 34 young adults who took part. Each of the youngsters who crewed for one leg of the voyage had come from disadvantaged backgrounds, and all subsequently achieved things they wouldn't have dreamed of beforehand, whether going to university or better jobs. Some of them even went on to help run Alan's follow-on project "Around and Around," which will see the next generation of young adults challenging themselves through sailing a newly refurbished Lively Lady on the high seas. 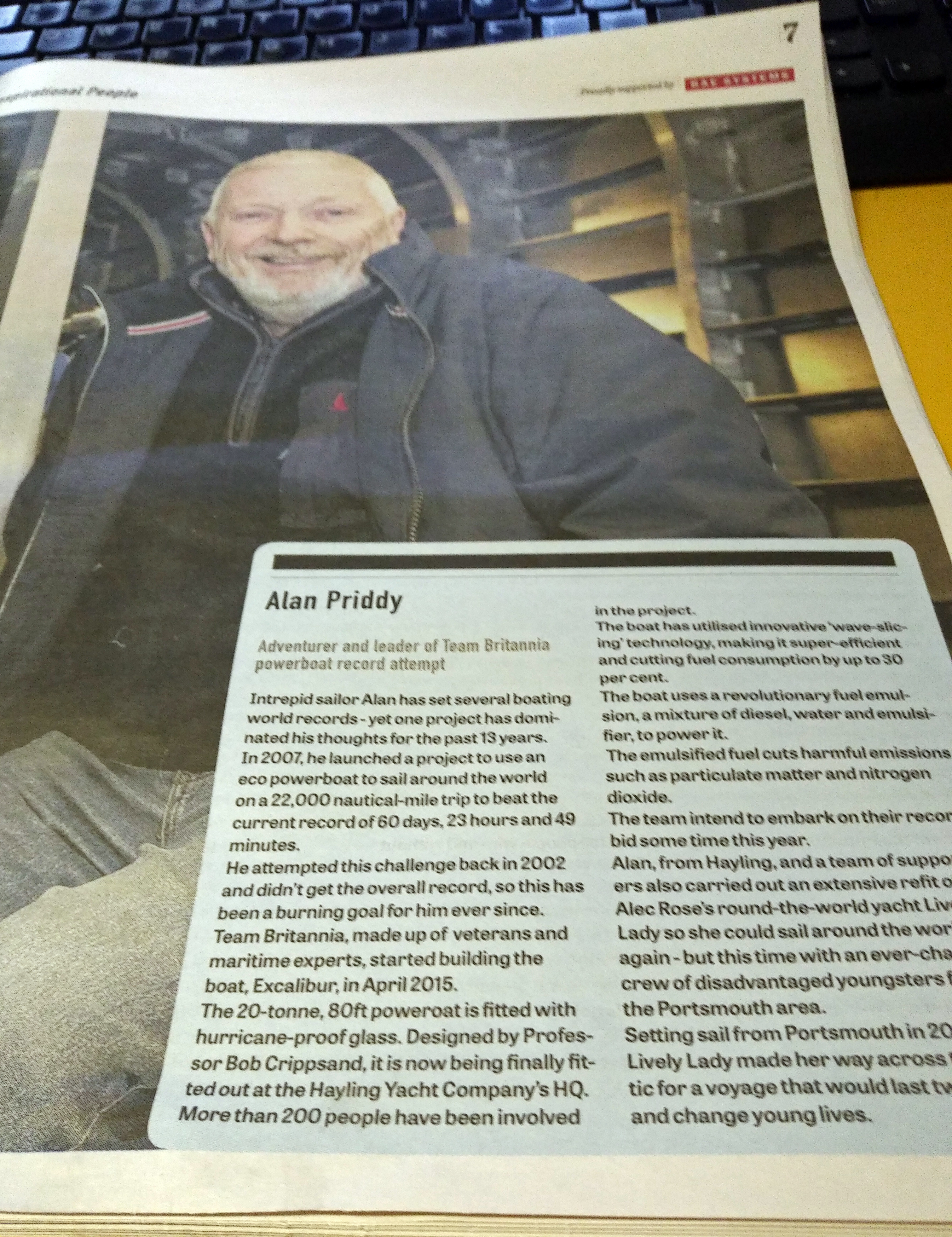 But while his day job as an engineer rebuilding automatic gearboxes paid the bills, his love of boats (he's a qualified boat builder as well as an engineer) and just being on the water is what keeps him going. When he took up playing about in Rigid Inflatable Boats, it was his skill in both areas that led him to develop them for long-distance expeditions, all the way to his epic transatlantic in 1997. Three weeks in an open boat, cold, wet, pack ice, storms - even being officially listed as missing at one point.

Not that I was wanting in the danger and excitement department before I met Alan in 1999. As a print and broadcast journalist specialising in travel with an outdoors slant, I'd been in many scrapes during mountain and wilderness treks, suffered food poisoning on six continents, and contracted potentially fatal Q Fever in Nepal. And while I hadn't had any guns pointed at me deliberately or been chased by pirates before I met Alan, I did once find myself on the receiving end of a creeping artillery barrage during a backpacking trip on the Cheviot - camping wild in the hills is a good way to miss seeing the red warning flags the following morning when they commence live firing!

In fact, it was a scrape in the mountains that in a roundabout way led me to meeting Alan. I'd badly sprained an ankle on day five of a three week trek in Kazakhstan, but instead of doing the sensible thing and taking up the offer to be helicoptered out, I carried on walking, fueled by painkillers. By the time I got back home, my ankle was well and truly wrecked. I had to use a stick for several months, and with no prospect of doing any serious walking for a considerable time, I searched for alternative things to write about. My career could have gone off in a completely different direction at this point - someone else might have seen it as the opportunity to review posh restaurants and hotels, or maybe spas. But for me, it still needed an element of action, so I plumped for watery pursuits.

So maybe it was fate that steered me in the direction of Alan Priddy, and me adding a few things I'd never imagined to my list of improbable pursuits. In the past, whenever unfamiliar activities might take me out of my comfort zone, I always looked at the face of the person in charge. If they seem unconcerned, there was no reason why I should be. Unless of course they're insane. It had been pointed out to me as I prepared to join Alan on the first attempt at circumnavigating the British Isles that a good few thought that he and crew mates Steve Lloyd and Jan Falkowski were all barking mad. I might have even believed them bearing in mind that that first trip out actually ended up with the boat colliding with some unseen object and being towed ashore by lifeboat. While for many that might have been the sign for me to progress to writing about flower arranging, it was Alan's coolness in a potentially dangerous situation that made me think I should follow through.

And while it was my thirst for what I thought would be a good story that led me further into the world of expedition powerboating to the point where Alan asked if I'd like to join his crew, part of my motivation to continue was the fact that Alan Priddy simply doesn't give up when events conspire against him. That was proved on numerous occasions on the 2002 round the world voyage, along with the other record-breaking trips in Spirit of Cardiff - both in dealing with situations, and people.

An example of the latter might be Alan's unorthodox approach to a little communication difficulty when we made a night arrival at the harbour in Galle, Sri Lanka. This was back in the days of the civil war, when the entrance to the harbour was barricaded at night to prevent terrorist attack. We'd been told a navy escort would be waiting to bring us in, but all we could see was a nondescript boat with some very non-navy looking men on deck. They're calling out to us, so Alan asks me to go outside and see what they want. What they want isn't clear, since it seems none of them speaks English, and in the ensuing confusion, one of them unslings his automatic rifle and aims it at me. Just as I'm thinking "Er, what do I do now?" Alan bursts out of the cabin, shouting "I want to speak to your commanding officer!" They probably didn't understand his words any more than they did mine, but they certainly got the tone. As it turned out, they were indeed the navy escort waiting to take us into the harbour.

There are many more examples of how we battle adversity in many situations on the Spirit of Cardiff (all recounted in a rather good book). But throughout all, for me, it was a case of "if Alan doesn't give up, neither do I." So after the Spirit of Cardiff era, there was no question that Alan would want to return to what for us was unfinished business - it was simply a matter of when and how.

That dogged refusal to give in when others would have gladly thrown in the towel is certainly what has kept Team Britannia going, inspired more than 200 people to support our quest, and none more so than when the first boat - built in Dudley 2011-12 - was terminally damaged by fire. Not only did Alan not give in, but he went back to the drawing board, coming up with what is now Excalibur. With the boat recently launched and in the latter stages of completion, that might all seem quite straightforward, but from the fire in Dudley to the first bits of welding on Hayling Island, we had to convince a lot of people that a project which existed purely on paper was viable - an extremely tall order over a span of four years.

So yes, achievements in the face of adversity, a shining example to us all - Alan Priddy, most definitely worthy of being celebrated in the Portsmouth News special supplement.