It's tempting to describe the launch of Excalibur on October 2nd in Churchillian terms - "not the end, not the beginning of the end, but it is the end of the beginning." The operation to move Team Britannia's superboat out of her shed and into the water was a slow, careful and painstaking operation which took the entire afternoon. If you've ever watched the filming of a movie or TV production, it was a bit like that - long periods of waiting around (for the watchers, not the crane crew) interspersed with short bursts of activity. 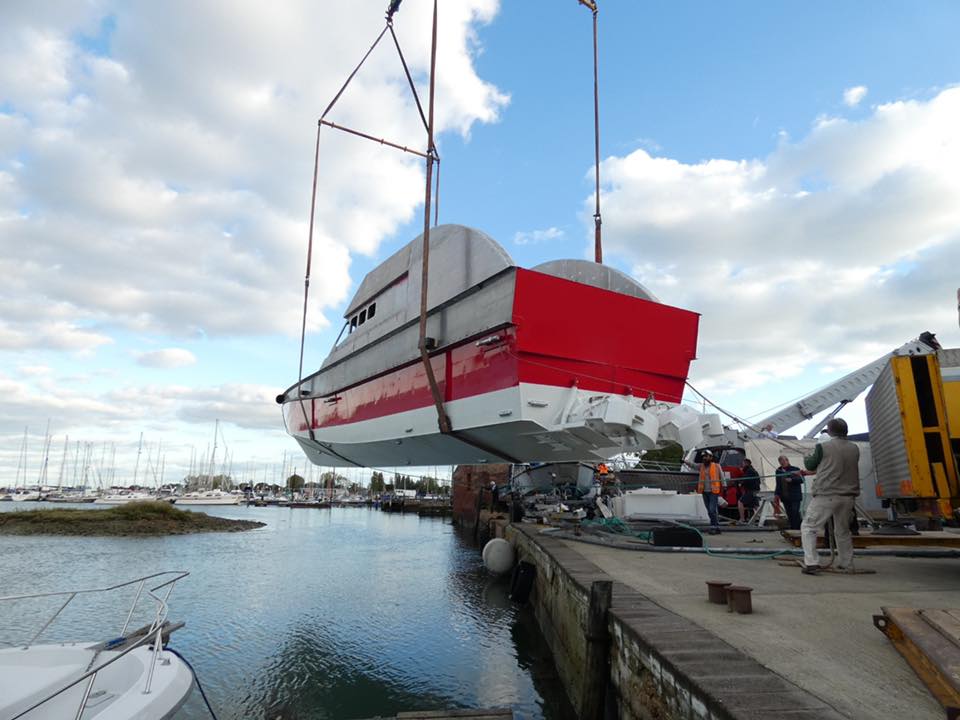 The stern support blocks were replaced by a trolley assembly, and then with a single sling from the crane taking the weight of the bow, the remaining support blocks were removed. At this point, one of our crew was busy with a paint roller applying antifoul to the small sections of hull previously obscured by the blocks.

Then, slowly, very slowly, Excalibur was inched forward until her bow was suspended over the edge of the quayside. At this point she was lowered onto blocks once again while the crane crew changed their lifting gear to fit two large strops around the boat. And then she was up in the air, and very gently swung round over the quayside into the water, and mooring lines made fast. Somebody wondered why we didn't crack a bottle of champagne over her, but that's something we'll save for when we have a proper naming ceremony. It certainly felt a bit strange simply stepping across onto the boat's aft deck instead of having to climb a ladder. All credit to our fantastic welders - as Slava helpfully pointed out yesterday after checking inside the engine room: "She's not leaking yet!"

The boat was moored at the quayside outside the boatyard on her first night in her new environment, then moved to a mooring at the adjacent Hayling Yacht Company for the remainder of the work to be carried out. There's still a lot to do before she's ready to commence sea trials, but having got to this point is an accomplishment in itself, and it certainly spurs us on to the next stage of the project.