It’s no longer enough for record-breaking afloat to be the realm of the petrolhead, says Clive Tully. Powerboats pushing the boundaries in speed should also step up to the environmental mark.

Whether you’re watching mighty Class 1 offshore powerboats thundering across the waves at over 100 mph or the scarily basic Thundercats – not much more than an inflatable catamaran with a plywood floor and an outboard – powerboat racing is every bit as exciting as any kind of powered racing on wheels.

Having been the UK official governing body of powerboat racing for decades, the Royal Yachting Association will at the end of 2018 relinquish that role, leaving the UK sport to be governed directly by the international governing body, the Union Internationale Motonautique (UIM), until such time as they appoint a successor organisation. Headquartered in Monaco, one might think them somewhat remote from nuts and bolts powerboating, where not every sponsorship cheque has at least six noughts on the end of the number. But to their credit, they have firmly embraced green technologies, including solar and battery-powered race boats. 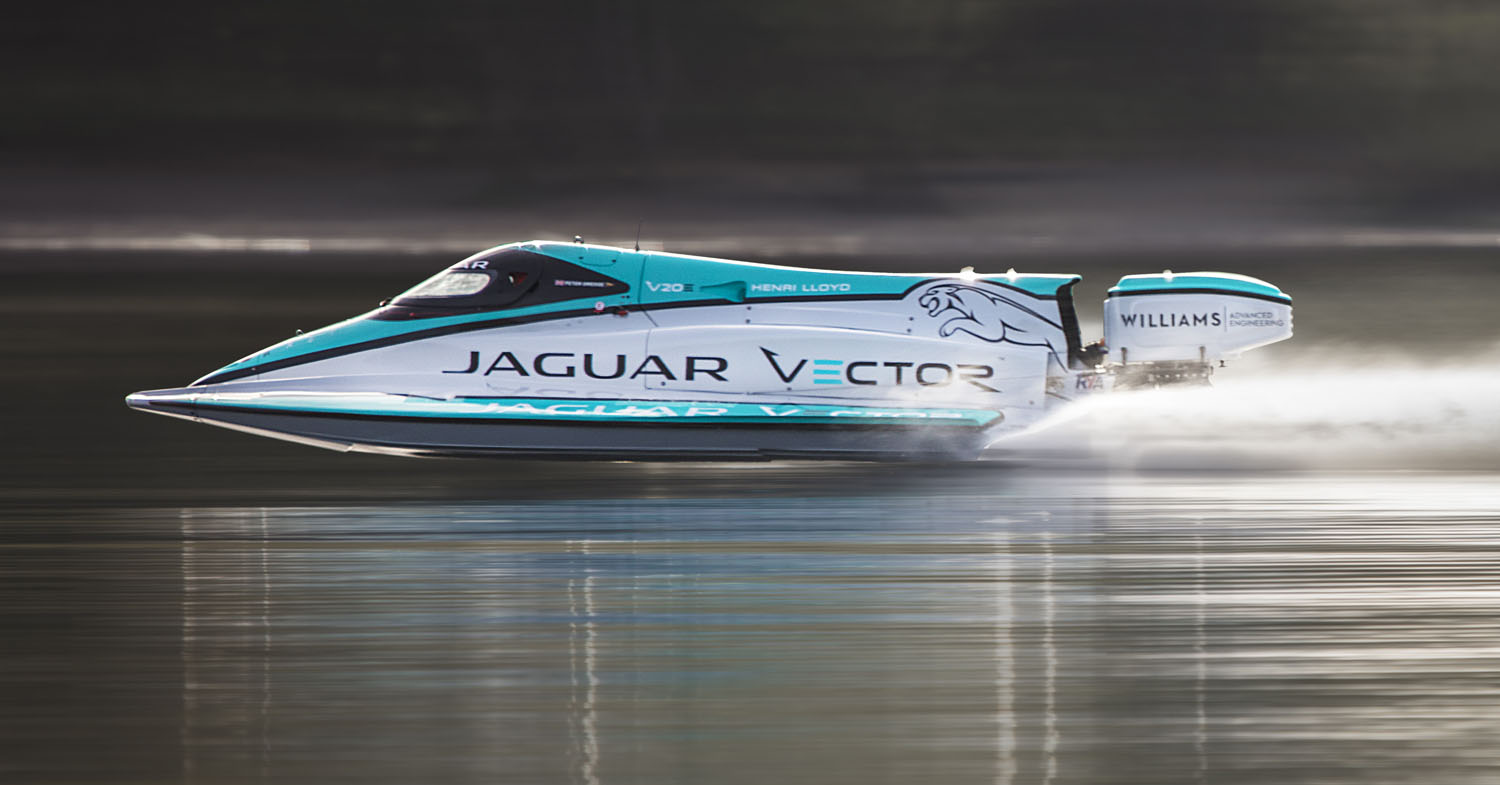 In Britain, heads turned this summer when Jaguar Vector Racing ran their V20E battery-powered boat on a one kilometre course on Coniston Water in the Lake District – scene of many famous world record attempts, including those of Donald Campbell’s ill-fated Bluebird K7. The aim was to attempt to break the outright world electric boat speed record – 76.8 mph – set 10 years ago.

“Whenever you get in a boat where you’re trying to travel fast and closer to the edge of most peoples’ comfort zones, there’s always an element of trepidation,” says V20E pilot and Jaguar Vector technical director Peter Dredge, “of what might go wrong.” But the boat, a Formula 1 race boat modified in partnership with Williams Advanced Engineering using technology similar to that developed for single-seater Formula E racing cars, performed flawlessly. In the two best runs along the course, the V20E clocked an average speed of 88.61 mph, breaking the record by a significant margin. 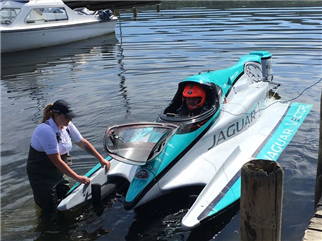 “I’m used to a fairly basic level of boat information before my eyes,” says Dredge, a powerboat racer with a long string of world championships and records to his credit. “But with the V20E, data was being transmitted from the boat to the Williams engineers with their laptops on the shore, and via a satellite link to the Williams HQ in Oxfordshire. So every little move was being scrutinised, but it all helped in fine-tuning the set-up to get the best performance from the boat.”

While electric road cars can be eerily silent, the V20E at speed sounds more like a jet aircraft. “Most of the noise was behind me,” says Dredge, “and with my helmet on as well, I wasn’t really that conscious of much noise. But there was a lot less vibration than when the boat ran with a petrol engine. It was simply a case of being super cautious as the boat picked up speed, then once it was on the plane, hoofing it!” 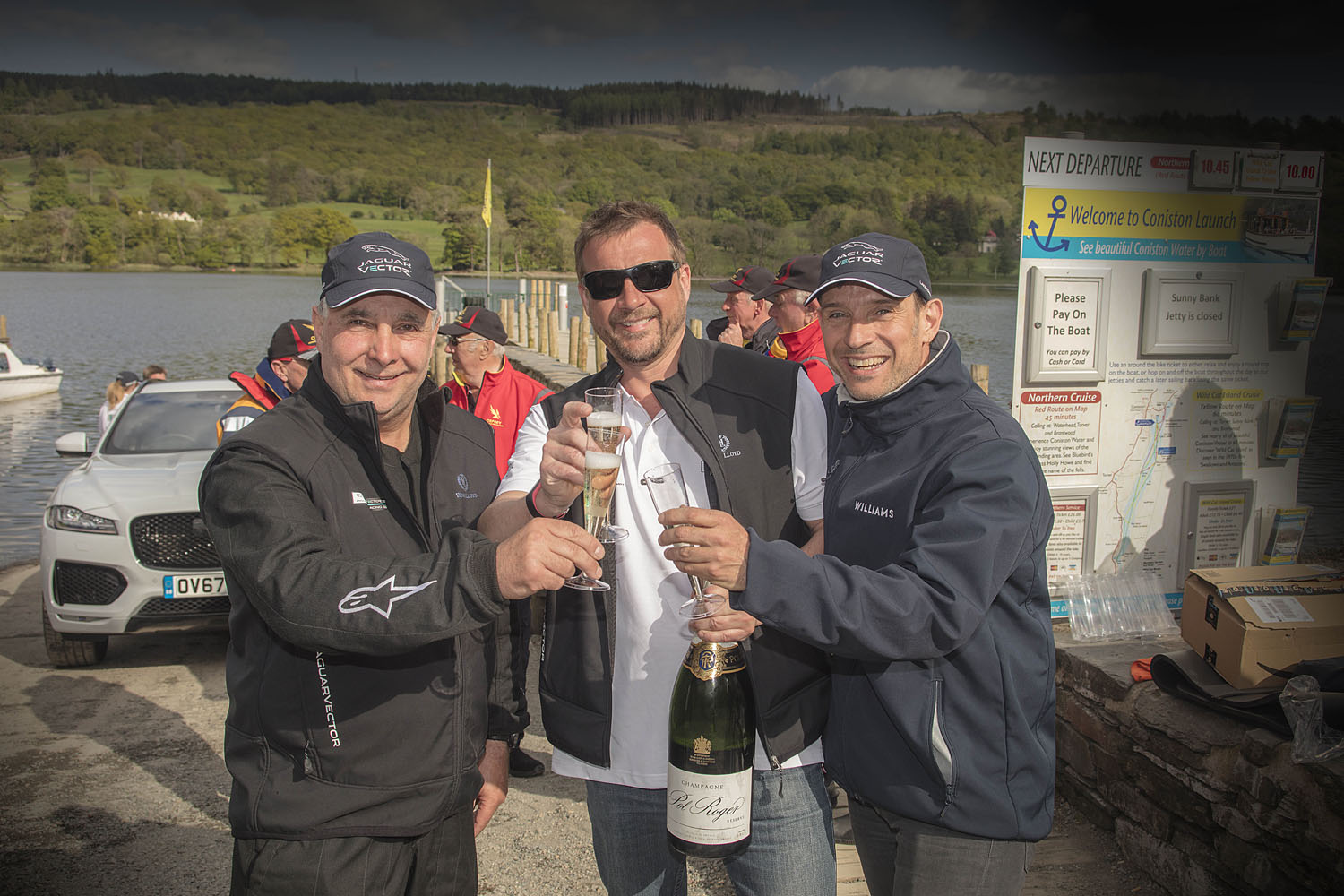 At the heart of Jaguar Vector’s success is the advanced Lithium Ion battery. In the Formula E racing cars, the biggest problem was keeping the battery and other components cool (fortunately a boat has plenty of cold water available), and protecting it from the vibrations inherent in competition racing, all without compromising the weight. Making a jump from fast car to fast boat might seem a logical progression, but it doesn’t end there. The Williams Advanced Engineering battery technology is seeing some interesting spin-offs, including use as power storage units for domestic homes.

“We’re delighted with the performance of the boat,” adds Jaguar Vector CEO Malcolm Crease. “The potential to take the bar much higher is now established.” Peter Dredge is optimistic, too. “We’ll almost certainly come back next year for another attempt. If we can improve the battery power, there’s no reason why we can’t get to over 100 mph.” 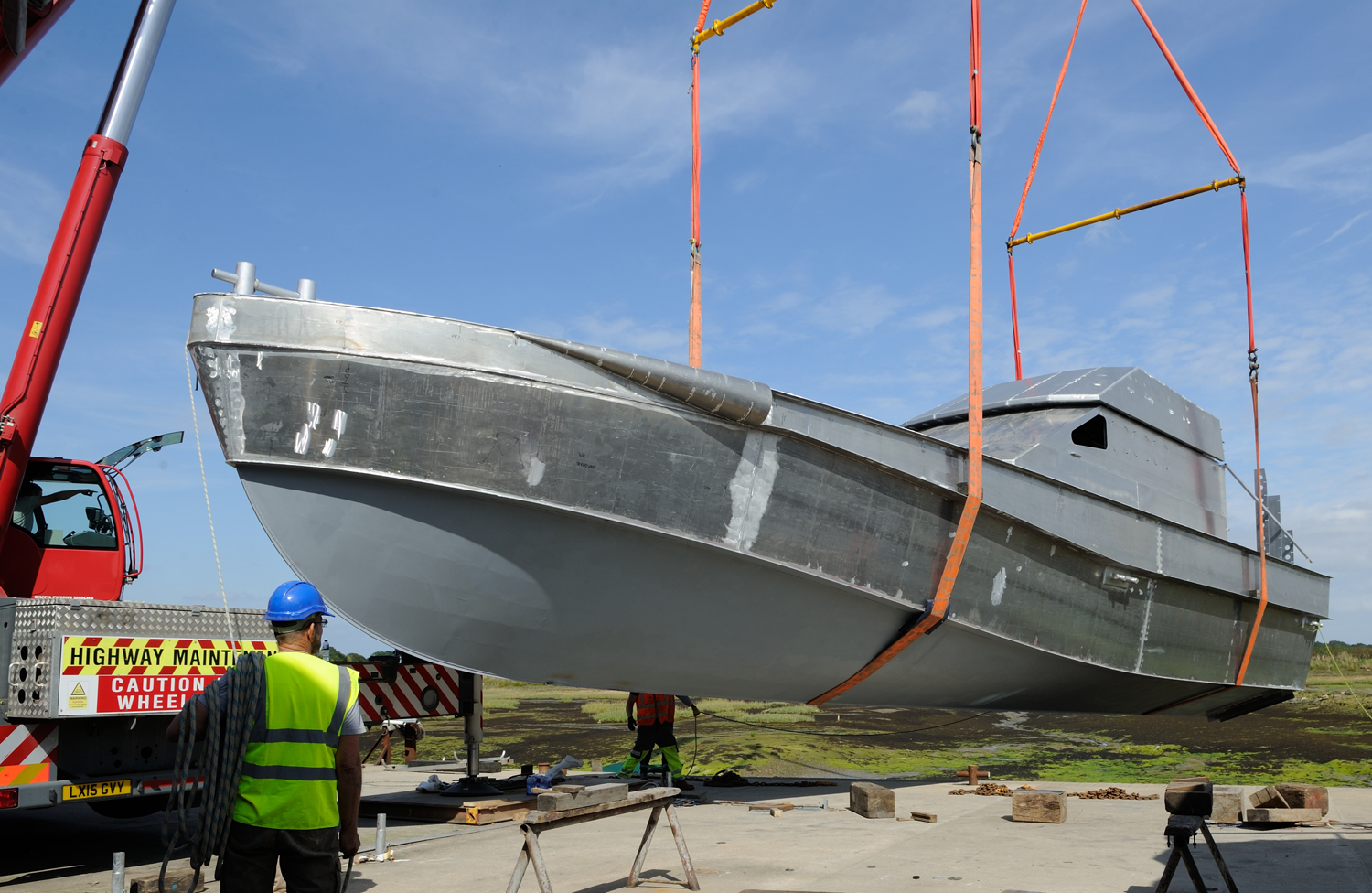 Speed records on a measured course are one thing, but when the record is for circumnavigating the globe, with deep ocean passages, multiple refuelling stops, along with the dangers of bad weather and even pirates, the logistics are immense. The powerboats that have so far set the UIM official world record (and there are only two), have both run diesel engines, with the current record-holder using their 60 days 23 hours 49 minutes circumnavigation in 2008 as a means to publicise their use of biodiesel.

Portsmouth-based Team Britannia’s 80 ft aluminium powerboat Excalibur, in the latter stages of construction on Hayling Island, will attempt to break that record, and while its twin diesel engines are pretty standard, the fuel they will be using isn’t. It’s been known for over 100 years that mixing water with fuel makes it burn more cleanly – the problem up until now has been how you maintain the mixed state, since water in either petrol or diesel tends to separate, leading to expensive engine damage. Through his company Clean Fuel Ltd, Team Britannia principal and ocean adventurer Alan Priddy – also a veteran of a previous world circumnavigation record attempt with the powerboat Spirit of Cardiff – has cracked the problem using an emulsifying agent and patented mixing process. 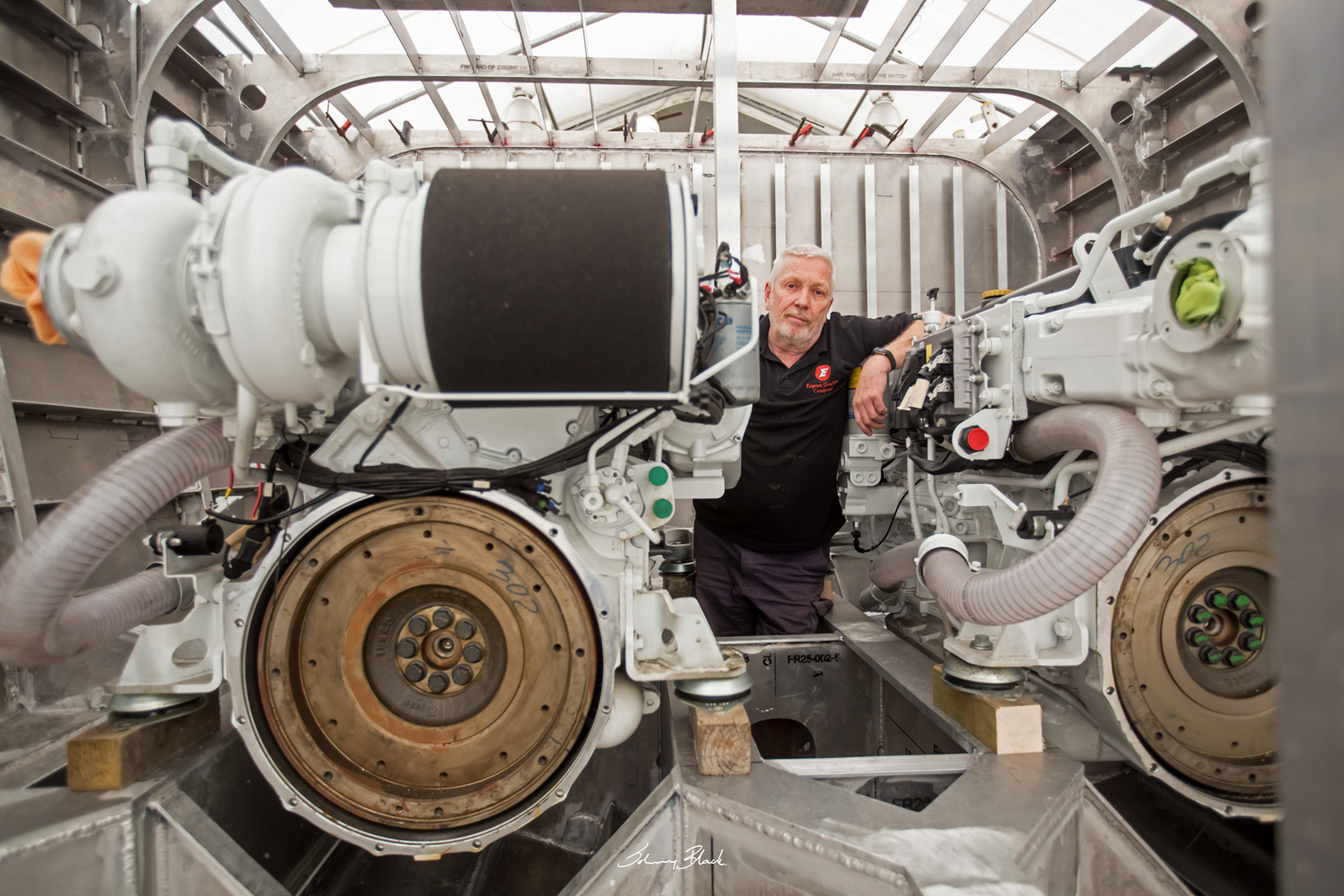 In over three years of testing, Priddy has turned a variety of aged vehicles from MoT test emissions failures into passes by doing nothing more than running them on a single tank-full of Clean Fuel’s Hydro Diesel. Apart from removing the nitrogen oxides and Particulate Matter so dangerous to human health along with reducing greenhouse gas emissions, running Hydro Diesel through the engine cleans away old deposits and improves its running.

“The commercial version will be based on around 15% water in the fuel and emulsifier mix,” explains Priddy, “but we have actually had an old banger running with 90% water – mixing the water and fuel at the molecular level enables energy in the water to be released during the combustion process!”

When Team Britannia’s Excalibur hits the waves at the end of 2018, the six 6,000 litre fuel tanks will be filled with regular diesel, and the mixing process using desalinated seawater will take place on the fly in the engine room. While that’s more than ample to cater for round the world passages of up to 3,500 nautical miles, if necessary, it will be possible to extend the boat’s range simply by altering the water to fuel ratio. 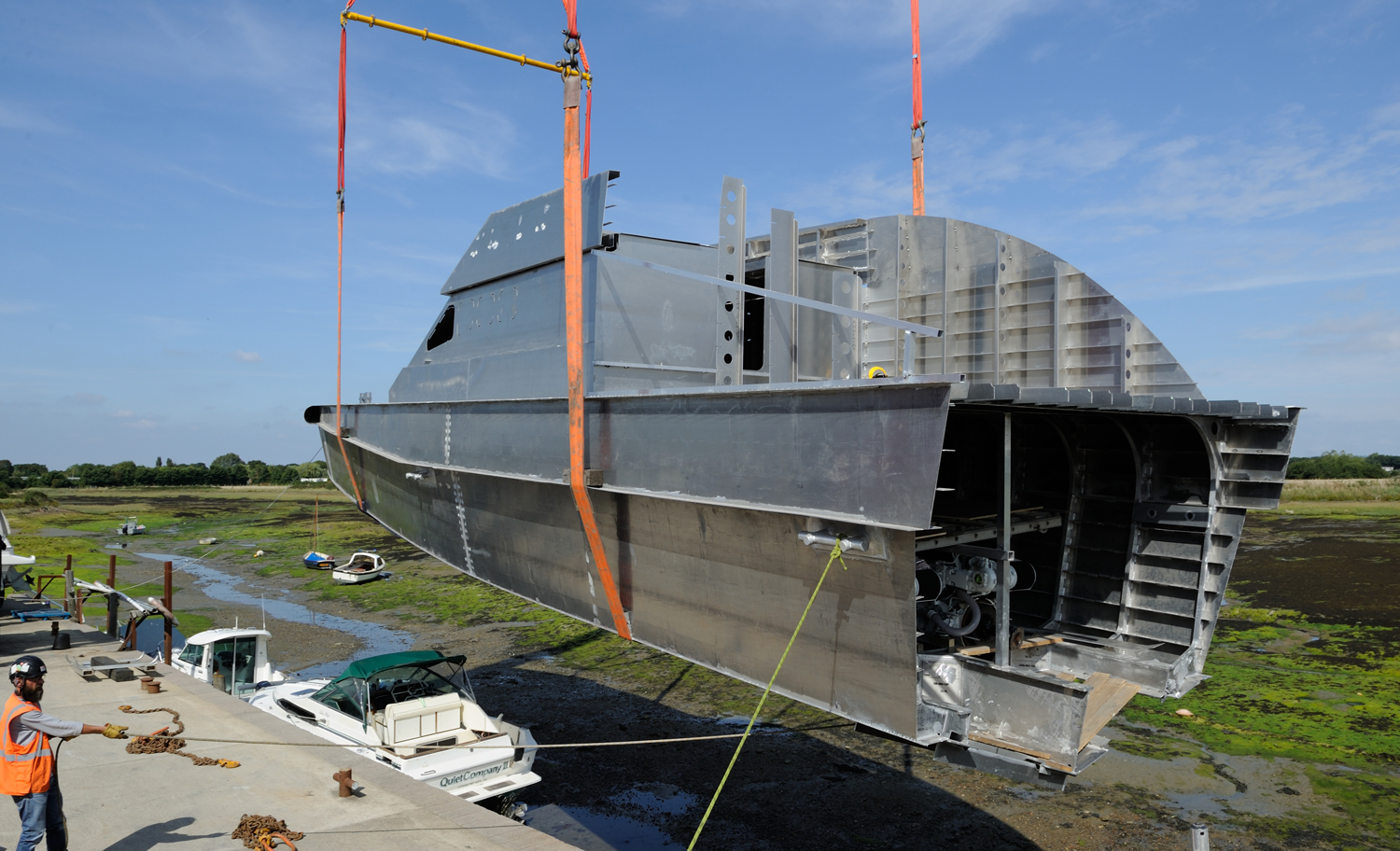 Team Britannia’s eco-theme runs through the project rather like the words in a stick of rock. At the heart of it is the choice of aluminium to build the hull rather than the carbon fibre composite favoured for round the world sailing yachts.

“We couldn’t consider carbon fibre,” says Alan Priddy. “Light and strong it may be, but in some quarters it’s regarded as the next asbestos time bomb. It simply isn’t an environmentally friendly material, and there’s no responsible way of disposing of it once it’s done with. Excalibur, on the other hand, is not only made from recycled aluminium, but in the event that she’s ever scrapped, over 90% of the boat will be recyclable.”

The hull design – claimed to be 30% more fuel-efficient than anything else afloat – was the brainchild of leading naval architect Professor Bob Cripps. But it doesn’t even end there. Excalibur’s power transmission is ultra-efficient, too, with the 800hp FPT engines coupled directly to Castoldi water jet drives with no intermediary gearboxes.

Mindful of the serious problem caused by plastics in the oceans, Alan Priddy last year agreed with the University of Portsmouth a programme whereby seawater will be sampled regularly and tested for suspended plastics throughout Excalibur’s circumnavigation. That co-operation has recently been expanded into an educational programme which will include not just pollution and environmental sciences, but engineering, sports science, health and wellbeing, and media. What this will achieve, believes Priddy, is not just a wider level of participation, but hopefully a legacy of data which will be of use to the university for many years to come.

So here we have two very different maritime projects, both of them highlighting British engineering excellence. And even if you’re not that interested in the record-breaking aspect, they do have the same aim at heart – Britain will not only rule the waves, but turn them green!

Clive Tully is a freelance journalist and Team Britannia’s onboard media crew member.