Alan Priddy has always sought to "put something back," which, over the years, has included founding BIBOA, the British Inflatable Boat Owners Association, and setting up his local branch of Rotary. His boating exploits have generated income for charities including Childline, the Cancer Care Society, the Multiple Sclerosis Society, Children in Need, and the Make a Wish Foundation. He has also set up a charity which built a school in India. 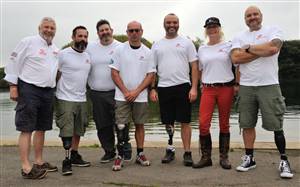 The British Limbless Ex-Servicemen's Association is an armed forces charity which since World War One has existed to support - for the duration of their lives - serving members and veterans who have suffered life-changing injuries. This may amount to providing activities to assist in rehabilitation to welfare support. It is a testament to their fine work that so many who have benefited from Blesma's assistance go on to raise funds for the charity, and act as ambassadors.

Many of Team Britannia's crew members supported by Blesma have already put something back for the charity, either individually, or as members of other team efforts. They have shown that they refuse to be defined by their injuries, which will be further highlighted when they participate in Team Britannia's record-breaking circumnavigation of the world.

When Sir Alec Rose sailed around the world in 1968 in his yacht Lively Lady, it was always his wish that the boat would subsequently be used for the benefit of disadvantaged young adults. When Alan Priddy set up the Raymarine Lively Lady project, it culminated in Sir Alec's yacht being refitted, and then making a second circumnavigation of the world from 2006 to 2008. Under the watchful eye of skipper Alan Priddy, Steve Mason and Andy Reid (also part of Team Britannia), an ever-changing crew of disadvantaged young adults from the Portsmouth area learned many valuable life lessons, and all have since gone on to achieve things far greater than they could have imagined.

Some of those participants are now acting as mentors for Around and Around, a charity set up by Alan Priddy with the aim of restoring Lively Lady once more to seaworthiness for another world circumnavigation. The boat is currrently undergoing her refit on Hayling Island, and it is hoped to have her ready for action by 2018, when she will take part in celebrations to mark the 50th anniversary of Sir Alec Rose's circumnavigation.