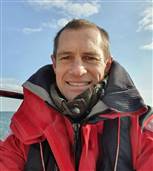 After last year's competition entry won him a crew place for a leg on Team Britannia's round the world powerboat record attempt, Lancashire sailmaker and lifelong boating enthusiast Andrew Bedwell might have seen it as a dream come true. But he also harbours another dream - to break the record for crossing the Atlantic in the shortest boat. This could be deemed as something on the far side of crazy, but as a world record, it has some form. Back in 1968, American sailor Hugo Vihlen crossed from Casablanca, Morocco to Florida in his 5ft 11ins boat April Fool. That record stood until 1993, when Englishman Tom McNally sailed from Lisbon, Portugal to Fort Lauderdale, Florida via Puerto Rico in his boat Vera Hugh, just 5ft 4½ins long. Amazingly, it was partly built out of a discarded wardrobe, with the hatch made from an old washing machine door. But McNally's record proved to be short-lived, as Vihlen snatched it away later that year, sailing from St Johns, Newfoundland to Falmouth, Cornwall in Father’s Day - just half an inch shorter! Since then, other attempts have included another go by McNally in the 3ft 10ins vessel Big C, and American Matthew Kent's Undaunted at 3ft 6ins. Neither of those progressed, so while Vihlen's 1993 record still stands, it's clear that the boat which breaks it is going to have to be around 3ft long, which is what Andrew Bedwell is aiming for.

"The size of the vessel doesn't allow laying down," says Andrew, "and as I am 6ft tall, the vessel's draft will be quite deep to accommodate me. The main issues other than the personal one of very restricted movement for many weeks are the navigation, communications and safety equipment. That has to be limited to say the least, so has to be as efficient as possible, yet still complying with maritime law. With such restricted 'deck' space and a speed which will never get beyond 2.5 knots, power generation and storage is a huge challenge, which we're working on at the moment."

Andrew's boat is still in the design stage, and while he already has several large businesses interested in supporting the attempt, we think others will follow. While the challenge itself may come across as Englishness at its most eccentric, it will be won by a combination of technology, ingenuity and stamina.